The Methodists' coming punishment of God

I wrote this with non-UMC readers in mind, so I do not dwell on the minutiae of the recently-released "Protocol" document. Besides, this is long enough without that. 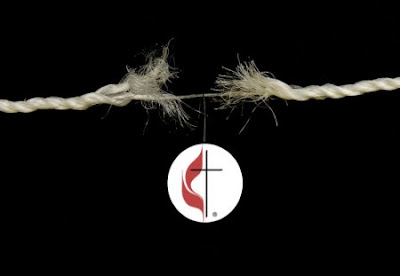 Why did this become suddenly worthy of such large-scale coverage? That the church has been wrestling with homosexuality since at least 1972 is no secret. Accurate headlines would read, "United Methodist Church leaders agree to catch up to fact that the UMC is already splitting over gay rights."

The UMC is the America’s second-largest Protestant denomination with about 7.5 million US members, and about that many around the world, with the largest foreign numbers in Africa.

The massive coverage of the latest split proposal, called “Protocol of Reconciliation & Grace Through Separation,” does not really break much new ground. There were already a few breakup plans proposed and on the table several months ago.

So, what is the situation now, what comes next, and what after that?

In fact, nothing has been decided and no actual actions have been taken to split the UMC. That a split is nearly certain to come before this summer is not much in doubt. But what the details will be no one can predict.

The UMC’s only body that can determine policy denomination-wide is the General Conference. Presided over by bishops, who can speak to issues but may not vote, the GC convenes once per four years and does not exist in between. It will convene again on May 5. The “gay issue” will certainly be the priority matter. Voting delegates come from the church’s conferences, which is what the UMC calls dioceses. The number of delegates is fixed; how many come from each conference is based on their membership number. Delegates per conference must be both laity and clergy.

So, what will the fight be about?

The present canon law of the UMC, called the Book of Discipline, says this:


• ¶ 304.3: The practice of homosexuality is incompatible with Christian teaching. Therefore self-avowed practicing homosexuals are not to be certified as candidates, ordained as ministers, or appointed to serve in The United Methodist Church. View full statement.

This has been the policy for many years. However, a special, called General Conference in February 2019 added mandatory penalties for violations and prohibited giving …


… United Methodist funds to any gay caucus or group, or otherwise use such funds to promote the acceptance of homosexuality or violate the expressed commitment of The UMC "not to reject or condemn lesbian and gay members and friends."

That GC also adopted means by which churches that could not abide by these provisions could withdraw from the UMC while retaining possession of their real estate and buildings. Some did, but not many.

Instead, the vast majority of progressives remained in the UMC to continue the fight. This caused two major consequences:
Long before the “Protocol” was released on Jan. 3, clergy from one end of the spectrum to the other had concluded that some sort of split of the UMC was not merely inevitable, it was desirable.

That the new changes to the Discipline formally provided for churches to withdraw was simply dismissed by UM progressives. They were determined that the UMC itself would become fully progressive, not some church splintered from it. That determination has not lessened.

True, the Protocol is not even on the agenda for this May’s General Conference, although there are ways it can be added. Even so, that it was released by the COB in an obviously pre-planned, coordinated national media campaign for maximum coverage, compels pulpit pastors like me to understand a sobering fact: We may not be interested in the Protocol, but the Protocol is very interested in us.


... the Protocol does not allow local churches or conferences to remain neutral any longer. In its current configuration, the Protocol requires that a choice be made—even if that choice is not to vote and thus remain in the post-separation UMC after the dust settles. The fight will now be taken to the local level.

The Protocol simply torpedoes whatever remained of the center. The center, or what was left of it, now no longer exists. When the president of the Council of Bishops is a Protocol signatory and its first appearance is on the COB's web site, the idea that there remains sort of centrist path is shredded. It is reasonable to assume that this is the outcome preferred by a clear majority, perhaps all, of the UM's bishops. On the date of this post the UM News Service announced that members of the team that developed the Protocol "will be interviewed in a live-streamed panel discussion on Monday, Jan. 13" for an hour at 9.30 a.m. EST on umnews.org. No other proposal for General Conference on this or any other topic has received such genuflection, which IMO speaks volumes.

So even if some bishops think there should still be a middle way, their peers have shut them down. (Remember, though, that the Council of Bishops formally endorsed a centrist plan for the UMC at the February 2019 special General Conference, and it was promptly rejected by both left and right.)

Pastors' shepherding of congregations through the coming schism will be challenging, to say the least. Each pastor will have to choose a side while still pastoring all the people of the church, and the people will be choosing their sides, too. Most congregations' members will not be unified with one another. I have known, for example, members who hold the traditionalist position but who also have homosexual close family members. For them, the issue is very personal. And that puts ministers right here: 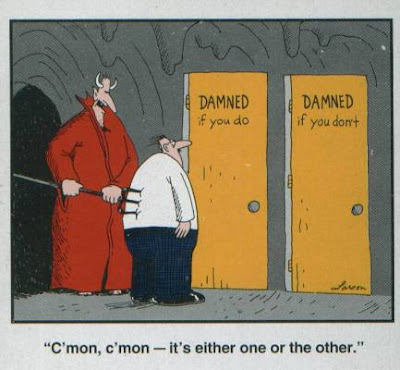 The reason is that congregants will fall into three basic groups of response:
Which is to say, we ministers (but not only us) are being presented with a Star Trek Kobayashi Maru no-win scenario, for which this Forbes article is useful in understanding in trying to maintain ethical leadership. It explains, among other things,


A crucial feature of good ethical decision-making in the real world is understanding the limits of your powers. You try to make choices that bring lots of good consequences and minimal bad ones, that fulfill your obligations to everyone to whom you have obligations (including yourself) — but you’re doing it in a complicated world where you must make your choices on the basis of imperfect information, and where other people are doing things that may impose constraints on your options. Ethics cannot require us to be omniscient or omnipotent. This means that sometimes even the most creative and optimistic ethical decision-maker has to face a situation where none of the available choices or outcomes are very good.

Even allowing for all that, the Protocol's basic premise that traditionalists and progressives must divorce one another is hardly disputed within the UMC. The Protocol likely will be added to the handful of "split up" proposals already on the General Conference's agenda. For sure, no one expects “the mess we’re in” to continue post-GC.

A safe assumption is that at least two Methodist denominations will arise from this May's GC. One will be progressive/liberal and the other orthodox/traditionalist/conservative. What the actual names will be who knows, but theologically and ideologically that’s how they will be. There could be other denominations, too.

It must be recognized that individual churches will get to choose. If My Town UMC's conference votes to be in the progressive church but MTUMC's members are mostly traditionalist, then MTUMC's members will be able to vote to join another denomination. But they will still lose some members when they do. Likewise if a progressive congregation votes to leave a traditionalist conference. Not all the sheep will follow. Shrinkage, probably dramatic at that, is inevitable.


And then what? There will be no Promised Land for either faction.

Both or all new denominations will be significantly down-funded from now. Staffs at the denominational, conference, and local-church level will diminish and there will be significant downward pressure on salaries from top to bottom. That means that most pastors and staff who can retire will do so and those who cannot yet retire but have other options will take them. The already-over bureaucratic structure of today's UMC will not collapse, exactly, but it will shrink a lot.

Even assuming there is an amicable split, or at least not an angry one, the coming few years will not be unicorns and rainbows for either progressives of traditionalists. I think both denominations will have many difficulties getting organized (which is to be expected) but also fights over their respective purity codes will erupt also. That is, what is it that marks one as a True Traditionalist or a True Progressive? Neither side can answer that right now because any answer given now is mainly influenced by the "mess we're in" and not what will pertain then.

Both denominations will find themselves bickering about a whole host of matters other than homosexuality, which as a topic will be off the table anyway. This will further cause church members to vote with their feet, accelerating the decline of Methodism in America. The Baptists or the MCC , however, will probably be very grateful. And then there was this posted by a friend I have known since before the internet:


Went to a Catholic funeral. At the supper I mentioned how beautiful their church was.
The answer was, "Beautiful yes, but it takes a lot of money for upkeep. We couldn't afford it if it were not for all the Protestants that are converting."


Where do we find God here? 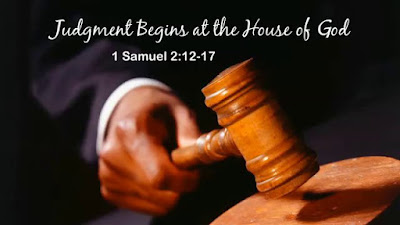 I hope for a far finer future than I envision. But as a very senior leader observed in my prior career, "Hope is not a method and wishes are not plans." In our history since our founding in the Christmas Conference of 1784, there have been quite a number of splits. The only one approaching the scale of what is coming this year was a full-scale  schism in 1844 over slavery. But slavery was ended and the two denominations finally reunited. The coming schism will be permanent. After all, homosexuality is not going to simply be ended like slavery was.

I know that God never withdraws his grace and guidance. Jesus' resurrection never becomes less efficacious. But I also remember this: 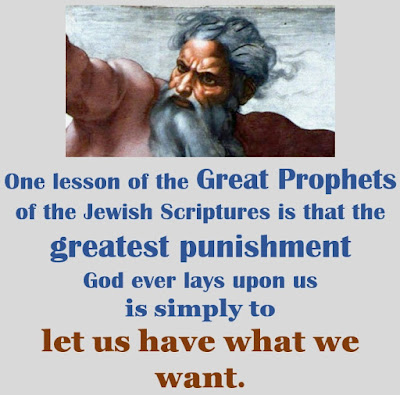 And we will get it good and hard.

If you think I am overstating all of this I only reply, wait and see. Because you ain't seen nothing yet.

The outcome will be like this, only it will not be funny.