After Orlando: The No Fly List and firearm purchases

I am writing this in response to the aftermath of the horrific mass shooting of the Pulse nightclub on June 12. Since then, many political leaders in America and many of my colleagues in ministry have offered various commentary, but the topic for this post is the insistence of many of them that persons listed on the TSA's "No Fly List" (NFL henceforth) should be prohibited from buying firearms.

That they should be so prohibited, by the way, was a specific point Preisdent Obama made during his Oval Office address to the nation after the Islamist mass murders in San Bernadino, Calif. in 2015.  The quote is:


To begin with, Congress should act to make sure no one on a no-fly list is able to buy a gun. What could possibly be the argument for allowing a terrorist suspect to buy a semiautomatic weapon? This is a matter of national security.

If we are going to debate this and other topics, it is necessary that we all understand what the terms are we are debating and what they mean. So what exactly is the No Fly List?

The NFL is nothing but a list of names that is used to prevent persons with a matching name - or even a similar name - from boarding an aircraft inside the United States. That is to say, the NFL is itself only names and nothing else - no secondary identification such as date of birth, place of residence, color of hair, height, etc.

When you make an airline reservation, either online or on the phone, the reservation system compares your name to the names on the list. If there is a match or if your name is merely similar to a name on the list, your reservation will succeed and you will be sold a ticket, but you will not be permitted to board the aircraft when you go to the airport. In fact, you will not even know your name, or a similar one, is on the NFL until you attempt to check in.

And you may not ever fly again until you prove - to the government's satisfaction, not yours - that you are not the person whose name is the real subject of the listing.

The ACLU has long been highly critical of the No Fly List and some of its chapters have challenged the law and its processes in court. The ACLU explains: 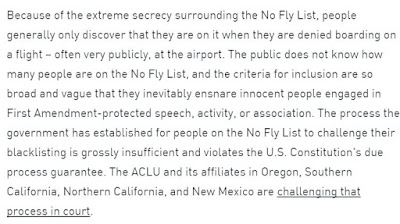 
U.S. Sen. Edward M. "Ted" Kennedy said yesterday that he was stopped and questioned at airports on the East Coast five times in March because his name appeared on the government's secret "no-fly" list.

Federal air security officials said the initial error that led to scrutiny of the Massachusetts Democrat should not have happened even though they recognize that the no-fly list is imperfect. But privately they acknowledged being embarrassed that it took the senator and his staff more than three weeks to get his name removed.

A senior administration official, who spoke on condition he not be identified, said Kennedy was stopped because the name "T. Kennedy" has been used as an alias by someone on the list of terrorist suspects. ...

"That a clerical error could lend one of the most powerful people in Washington to the list -- it makes one wonder just how many others who are not terrorists are on the list," said Reginald T. Shuford, senior ACLU counsel. "Someone of Senator Kennedy's stature can simply call a friend to have his name removed but a regular American citizen does not have that ability. He had to call three times himself."

In fact, Sen. Kennedy publicly made the same point as ACLU Counsel Shuford. But note that even though Kennedy picked up a phone and called DHS Secretary Tom Ridge to get his name removed, it still took three weeks. In fact, though, "T Kennedy" was not removed from the list, the DHS just issued instructions that Sen. Kennedy would not be delayed. I would submit that us peons will not enjoy that advantage of present DHS Secretary Jeh Johnson answering the phone personally when you or I call him.

The ACLU explains their continuing, serious concerns and legal actions regarding the No Fly List at some length here. And in 2014, Reuters reported, "Federal judge rules U.S. no-fly list violates Constitution."


The U.S. government's no-fly list banning people accused of links to terrorism from commercial flights violates their constitutional rights because it gives them no meaningful way to contest that decision, a federal judge ruled on Tuesday.

U.S. District Judge Anna Brown, ruling on a lawsuit filed in federal court in Oregon by 13 Muslim Americans who were branded with the no-fly status, ordered the government to come up with new procedures that allow people on the no-fly list to challenge that designation.

And speaking of the DHS,


Rep. Stephen Lynch (D., Mass.) disclosed that a congressional investigation recently found that at least 72 people working at DHS also “were on the terrorist watch list.”

It should be noted that the No Fly List and the Terror Watch List (TWL) are two distinct lists that have different purposes. Being placed on the TWL does not automatically place that name on the NFL and FBI Director James Comey is on record saying that it should not do so.

There is a long list of "false positives" on the No Fly List at Wikipedia article on the topic. A few examples:
There are many other such examples. So secretive are the NFL's processes that last year the left-of-center Huffington Post published,


Earlier this week, The Intercept published a 166-page document outlining the government's guidelines for placing people on an expansive network of terror watch lists, including the no-fly list. In their report, Jeremy Scahill and Ryan Devereaux highlighted the extremely vague and loosely defined criteria developed by 19 federal agencies, supposedly to fight terrorism.

Using these criteria, government officials have secretly characterized an unknown number of individuals as threats or potential threats to national security. In 2013 alone, 468,749 watch-list nominations were submitted to the National Counterterrorism Center. It rejected only 1 percent of the recommendations.

HuffPo went on to explain seven ways you can wind up on the list:
UCLA Constitutional Law Prof. Eugene Volokh wrote in The Washington Post,


"... wouldn’t the argument [against the proposal] be that these are just “suspect[s],” and we don’t deny constitutional rights based just on suspicion? If you think you can prove someone is a terrorist, lock him up. If you have probable cause to think he’s a terrorist, and think you can develop proof beyond a reasonable doubt, arrest him. Even if you have only suspicion, follow him, ask people about him, and so on. But if you don’t have enough to prosecute or even arrest someone, you can’t take away his constitutional rights, even if you suspect he’s a terrorist (or if you suspect he’s a drug dealer or a gang member or whatever else).

In another article, Prof. Volokh points out that while many people say that the Second Amendment does not secure the right of individual persons to keep and bear arms, President Obama has himself said that it does. According to Whitehouse.gov, on January 16, 2013, President Obama said:


Let me be absolutely clear.  Like most Americans, I believe the Second Amendment guarantees an individual right to bear arms.

Another point: I think the question is reasonable that if someone is threatening enough to bar from flying and from buying a gun, shouldn't they be arrested? If not, why not? As the ACLU says,


Until the government fixes its unconstitutional new [as of 2014] process, people on the No Fly List are barred from commercial air travel with no meaningful chance to clear their names, resulting in a vast and growing group of individuals whom the government deems too dangerous to fly but too harmless to arrest.


To begin with, Congress should act to make sure no one on a no-fly list is able to buy a gun. What could possibly be the argument for allowing a terrorist suspect to buy a semiautomatic weapon?

By now I hope the reader can see that imprecision of language is one of the greatest obstacles we have in coming not merely to agreement, but in even speaking cogently to one another. And the president's language here was inexcusably imprecise because the No Fly List is not a list of terrorist suspects, which should be abundantly clear from the sources I have cited above. There is such a thing as a federal terrorist watch list, but that is not the list the president was referring to. Or was it? We really do not know.


Dr. Patrick Stephen Hackett is a veterinarian — not a terrorist.

Try explaining that in the airport security line.

Hackett has never been arrested and never traveled to the Middle East or other centers of terrorist activity, but he found out more than a decade ago he’s on the federal watch list because he shares the same name as notorious Irish Republican Army terrorist Patrick Joseph Hackett, who was jailed in the 1970s for planting bombs in Britain.

The difference should be easy to spot. The terrorist is missing an arm and a leg — blown off when a bomb exploded prematurely — while the Knoxville veterinarian has all his limbs intact.

And note that the actual terrorist and the veterinarian do not in fact have the same name.

If we’re going to have a No-Fly List and a Terrorist Watch List to provide security for American citizens, then we need to codify such programs by passing a constitutional amendment which clearly spells out the limits and scope of such programs. To me, there is simply no other constitutional way to achieve this goal.

Now, don’t get me wrong. I’m not arguing that such pre-emptive security measures are inherently a bad thing. And I’m certainly not arguing that suspected terrorists should be able to easily acquire high-powered weapons. I’m not “pro-terrorist” in any way, shape, or form. Just to be clear.

But I am arguing that what we’ve got now is blatantly unconstitutional. And it appears nobody else is even willing to make such an argument, at the moment.