No, rocks are not the same as rifles

As a retired US Army combat officer (I began seminary three weeks after I retired), I am disturbed by what the military's commander in chief said about use of force by the military when the "caravan" arrives at our southern border. 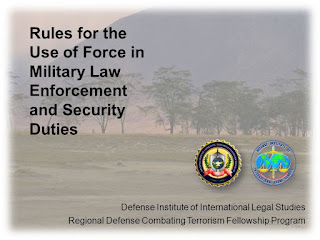 The president's quote, as I have heard it several times in news reports, is:

Fortunately and thankfully, we do not have a politician as secretary of defense but a retired four-star general who knows that what the president said is total idiocy. Secretary Mattis just can't say so publicly.

As someone who both wrote and received operations orders for combat operations, here is what the troops will be told. Every OPORD, as we called them, has a section entitled Rules of Engagement, or ROE (although for non-warfare operations it is usually referred to as RUF - Rules of Use of Force).

The staff proponent for ROE or RUF is the staff judge advocate, or chief military lawyer for whatever authority is issuing the order. It is the SJA's responsibility to ensure that the ROE accord with relevant federal laws (of which there are many even for overseas, active warfare), while also protecting the lives and safety of our own troops. Willful violation of the RUF is a chargeable offense.

I cannot imagine any RUF for this deployment that fails to include the following:

1. Prohibition on use of any force that extends across the border, into Mexico.

2. Prohibition of use of deadly force except actually to protect life or injury of the troops or border patrol. Does this mean that US troops (for the very few that may be near the caravan) will be authorized to shoot someone throwing rocks at them? Yes, it may mean that because thrown rocks can be grievously injuring or even lethal, but even so, troops cannot violate No. 1, above, and deadly force would have to be in extremis.

But I have no crystal ball and I hope no one gets harmed no matter who they are. No matter what one advocates I hope we can agree to unite in prayer for the grace of God to descend upon all concerned.
Posted by Donald Sensing Links to this post