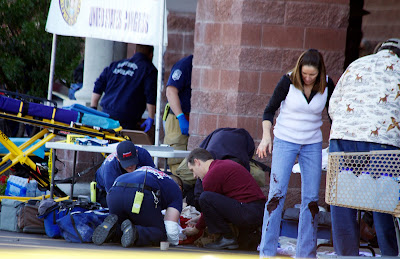 Nine years and a few months ago someone asked me whether I was surprised that 19 Islamists had hijacked four airliners and killed almost 3,000 people. The question struck me as odd. Why is anyone ever surprised of the evil men do? "There is no one who does good, not even one," said the Psalmist, and so why should we be surprised that some commit actual evil?

We have learned again, from Tucson, that we civilized people cannot constrain the devil that stalks the human soul. "Who knows what evil lurks in the hearts of men?" asked the Shadow, so far be it from me to psychoanalyze Jared Loughner. Best leave that to Sheriff Clarence Dupnik, whose flashing-quick diagnosis of Rightwing Derangement Syndrome for Loughner surely was the fastest-ever solving of the "motive" side of the means and opportunity triangle. What the psychs will discover about Loughner I leave to them.

Yet how odd that in our postmodern conviction and scientific certainty that we can easily find the answer, we gloss right over one that no one seems willing to utter, mayhaps 'cept I: "He has a demon, and is mad." Of course, that was an accusation made against Jesus, and is today an excellent summary of the mainstream-media commentary (such as the NYT's Paul Krugman's) on the Jedi mind-control that they claim the Right's "climate of hate" exercised over the hapless Jared Loughner. So we mustn't take it too far.

I retreat from such rhetorical arguments. In arguing that, "He has a demon, and is mad," I am not trying to argue the literal existence of demonic beings who actually enter the bodies and spirits of human beings, taking "possession" of them and controlling their actions. The modern mind has no room for that. I refer instead to sickness of the mind and of the soul, a spiritual sickness that aligned itself with the evil that is out there.

Evil is within us, but not only within us

French philosopher Paul Ricouer argued in his book, The Symbolism of Evil, that one of the things taught by the temptation stories of the Bible is that evil resides within the human breast but not only there. There is an "externality of evil," as he put it, symbolized in Genesis by the serpent. Within these texts is a strong subtext, not only in the Bible but in cultural myths around the world that there is a seduction of the human mind and the human body by the "tragic" of creation into which we are born, "which is already there and already evil" (his emphasis). There is, he says,

"Peccability" means that we mortals are temptable. Because of this fundamental fact we will be tempted by an externality much and yield to it often - usually, happily, on harmless things like another piece of chocolate but not infrequently to evil itself. When we yield to the harmful rather than the merely frivolous it is sin, indeed, too often mortal sin which, as we saw in Tucson, can be lethal as well.

This is not a modern world view. We have exorcised sin conceptually from our vocabulary, our discourse and hence, our understanding of the human condition. "He has a demon, and is mad" is eye-rolled for the former part and medicated for the latter - psychiatry today exorcises pharmaceutically, not ritually. And yet for all its chemically-reliant wonder, no mental-health professional will ever be able to explain away that the human being is predisposed to cooperate with the iniquitous, a cooperation that not merely endures but increases until it forms the horizon of actual evil, evil that erupts so tragically.

The human condition is tragic

"Tragically" is a key word, for the ancients did not use it as we do, simply to mean "sadly." The Greek playwrights knew tragedy as the unfolding of human character, hence human events, not as they are predestined but as they are predisposed. Tragedy is not random or accidental. It is the result of human striving, whether for good or ill, not exactly inevitable but not altogether avoidable. Even the heroic can be tragic.

Always, the ancients knew that the tragic is woven inherently in the human condition because they understood what we have progressively dismissed: that "there is no one who does good, no not one," except now and then, here and again, but almost never as a habit. Virtue, said Aristotle, is excellence made habitual, which is exactly why virtue is so rare: the habits of man are rarely excellent and left to themselves, without rigorous moral training or an externality of constraint to the good, will always become corrupted.

What makes the human condition tragic in this sense is that evil is never temporary and triumphs are never permanent. Salve of compassion, care and grieving is being applied to Tucson, but some must be saved for the next venue. For certainly another there will be.

Update,Jan. 13: This is very similar to what President Obama said in his speech the evening of Jan. 12:


Scripture tells us that there is evil in the world, and that terrible things happen for reasons that defy human understanding. In the words of Job, "when I looked for light, then came darkness." Bad things happen, and we must guard against simple explanations in the aftermath.

For the truth is that none of us can know exactly what triggered this vicious attack. None of us can know with any certainty what might have stopped those shots from being fired, or what thoughts lurked in the inner recesses of a violent man's mind.

That is very close to what it means to say, "He has a demon, and is mad." Bad things happen for which facile, "just so" stories offer no insight or understanding, especially if we agree with progressivism's mantra that, "people are basically good." This is a very modern world view, dating only about 130 years back. But it is empirically, provably false considering only the history of humanity of the last 100 years.

The president's quote from Job, "when I looked for light, then came darkness," is actually quite appropriate because the light of human reason and ability is simply too weak to overwhelm the darkness of the tragic of creation and the human condition. That is the primary, bitter lesson that Job must learn by the end of the book, as well as that human understanding is exceedingly partial, fragmentary, incomplete and usually misguided.

Update: God and Las Vegas
Posted by Don Sensing Links to this post