Facts are not important, politics is

This was posted by a very liberal long-time friend and fellow cleric of mine. 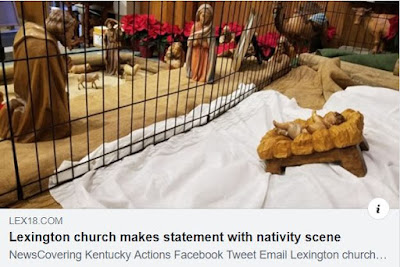 Why did the Holy Family need to move to Egypt in a hurry? The answer is one word: government. Yet to my friend and others of his leanings, government is always the solution, never the problem.

But the facts don't matter when political hit jobs can be done even on pretense.

Update: In response to another minister's query (who is a friend and not just on FB), I wrote this:

To say that Egypt and Judea were "countries" under Roman rule is about as accurate as saying that Kazakhstan was a country under Stalin. Maybe it was once, and wanted to be again, but in 1948 it was not. It was a Soviet province and nothing more.

Likewise Judea and Aegyptus. The Holy Family changed province of residence but it did not change who governed them.

Now, whether the Holy Family were refugees. Yes, Matthew is clear that they made the trek to Aegyptus because of Herod's lethal plans. But again, while they changed provincial government, there was no political difference, just as if someone moved from Virginia to North Carolina.

Which are states I use on purpose because, as I am sure you know, Virginia's Gov. Northam has publicly stated that he will call out the National Guard to enforce the state's new, draconian gun laws - laws that have caused 90 percent of the state's county commissions to declare that they will prohibit any local law officers to enforce or assist state authorities in enforcing.

Which is to say, Gov. Northam is in fact directly threatening to use actual soldiers to kill people who have committed no offense against the peace or safety of anyone at all or even can be remotely considered such a threat.

Think that cannot happen? In November of last year, Maryland police shot to death a 61-year-old man in his own home who had committed no crime but for whom a court had issued a "red flag" order.

IMO, Gov. Northam is today's Herod. So when (not if, btw) some Virginia 2nd Amendment advocates decide to leave potentially-fatal Virginia to live in North Carolina, will they be refugees? If not, why would the Holy Family have that status?

Tomorrow in my sermon I will quote the Rev. Joy Carol Wallis thus,


Herod represents the dark side of the gospel. He reminds us that Jesus didn't enter a world of sparkly Christmas cards or warm spiritual sentiment. Jesus enters a world of real pain, of serious dysfunction, a world of brokenness and political oppression.


Jesus was born an outcast, a homeless person, a refugee, and finally he becomes a victim to the powers that be. Jesus is the perfect savior for outcasts, refugees, and nobodies.

I will omit the italicized part because it is simply incorrect.

Email ThisBlogThis!Share to TwitterShare to FacebookShare to Pinterest
Labels: Faith and Practice, Faith and Reason, History, News and journalism, Politics 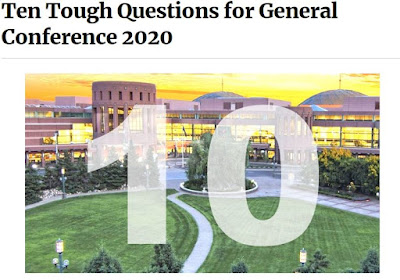 The 10th point is the toughest one:

10. Remember, the ‘wicked problem’ of the denomination far transcends sexuality


This last point is not framed as a question because of its truth there is no question. No matter what the GC decides, decline and irrelevance will continue to accelerate unless larger issues are named and tamed. Examples are trust deficits, miscommunication, theological conflicts/contradictions, ineffective organization, inefficient structures, disjointed training and education of clergy or establishing coherent ministry career paths. Organizations facing a wicked problem either tend to ‘fail into collaboration’ among competing stakeholders…or they just fail (see above). Nurturing trust and affirming the claim of conscience for all parties sets the stage not for failure but new birth.

The author earlier posted an essay with a full explanation of what a wicked problem is, as distinguished from a simple problem or a complex one (click here). But briefly, a wicked problem is that which all parties agree exists but do not agree on how to describe it, nor on what a solution can be, nor even on how to implement a resolution or know when it has been accomplished.

I have elsewhere explained that one such wicked problem, which I think underlies all those listed just above, is Pournelle's Law, formulated by the late, great science fiction writer Jerry Pournelle. It is: 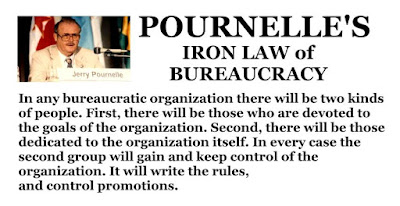 And no, I do not have a solution to it.
Posted by Donald Sensing Links to this post

Grace and peace to all!

I subscribe to a daily newsletter by a Canadian minister, the Rev. Carey Nieuwhof. He is one of only two or three such writers that I know who are always worthy of reading because the majority of his writing applies in some way to my ministry. He does not write merely for other pastors, but also for the people of churches. I do recommend taking a look at his site, https://careynieuwhof.com/.

Recently, his email included this nugget: 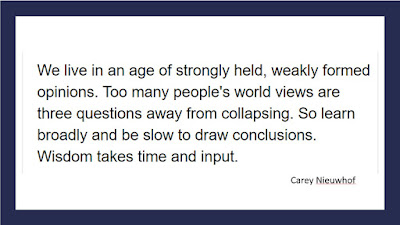 One of the most difficult things to do is self-challenge what we know. As someone once remarked, it is not what we do not know that is often the problem, it is that so much of what we think we know is not so. The balance between retaining what have tested and found enduring, and discarding what serves us well no longer—well, that can be tough.

Just imagine what the first followers of Jesus had to discard and adopt. Start with Peter, whom Jesus told to stop fishing for fish and start fishing for people. Or much earlier, the shepherds, who had to face that the Messiah was born in the humblest of settings to undistinguished parents. Or Mary, that she was being asked to face possible social disaster in being pregnant with a child that her fiancé could not say was his. And Joseph, who is described as a honorable man who elected to do what in his day was a dishonorable thing, marrying Mary anyway.

The story of Jesus’ nativity and ministry is one of turning over tables, both literally in the Temple confronting the money changers, but also figuratively, for bringing people to confront that so much of what they knew simply was not so:


“You have heard that it was said, ‘Love your neighbor and hate your enemy.’ But I tell you, love your enemies and pray for those who persecute you, that you may be children of your Father in heaven" -- Matthew 5.43-45

If we are truly blessed, we are seriously disturbed this Advent by the implications of Jesus’ coming and nativity. May the Holy Spirit lead us to think more deeply about what we think we know and what it means for the way we live and more importantly, why we live.

The gifts of Advent and Christmas are twofold, at least: