Anyone recognize this site? 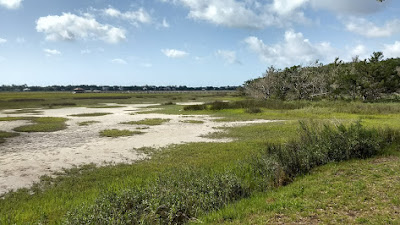 This is the location of what is almost certainly the least-known important battle in American history, the Battle of Bloody Marsh, 1742, Saint Simon's Island, Georgia. The victors were the British, the vanquished Spanish.

After this battle, the Spanish empire abandoned all of North America north of present-day Florida. Before the battle, Spain had claimed all land presently comprising Georgia, Alabama and Mississippi.

Georgia was the last of the 13 future-USA colonies to be settled, partly because Spain had claimed it in the 1500s. Britain wanted Georgia and called the territory south of South Carolina "debatable land." They (and the Spanish) knew that the debate would be carried out by gunfire, not rhetoric.

The main British figure was James Oglethorpe, a former member of Parliament who could have lived at ease in Britain. But he wangled a commission from King George II to establish British settlements in Georgia. He started with Savannah in 1733 and in 1736 established a coastal fort at Saint Simons Island that he named Fort Frederica, after the Prince of Wales (using the feminine form because there already was a Fort Frederick in South Carolina).


A humanitarian reformer and abolitionist, Oglethorpe also established a town next to the fort that he wanted to be a refuge for England's destitute. The town eventually grew to several hundred people but never attained economic viability.

In 1740, war broke out between Spain and Britain. Oglethorpe took troops from Fort Frederica and embarked with a war fleet against St. Augustine. After 38 days of futile bombardment, Oglethorpe sailed back north. He and his regiment returned to Fort Frederica to await the inevitable Spanish retribution.

Campaigns moved slowly then. The Spanish moved against Saint Simons in 1742. They captured Fort Saint Simons quickly after Oglethorpe ordered it abandoned and burned. The Spanish then set up to cross the island, which was heavily overgrown and marshy in that day.

The leading Spanish element was a recon patrol, sent to find landward approaches to Fort Frederica. In this it failed, but Oglethorpe's Indian allies reported the patrol was within a half-mile of the fort. Oglethorpe, who had a bit of a temper and impulsiveness, rounded up some Highlander soldiers and set forth to ambush the Spanish. This he did, joined by numerous Chicksaw, Yamacraw and Creek warriors.

The skirmish lasted less than  an hour, but it cost the Spanish recon element 36 killed or captured, about a third of their number, including an officer second in command of all the Spanish troops. The rest fled toward Fort Saint Simons, where they encountered a relief force of Spanish troops coming to their rescue. This firefight became known as the Battle of Gully Hole Creek.

Meanwhile, Oglethorpe learned from interrogated prisoners that a larger Spanish force was planned to come down the single, narrow road connecting Fort Frederica with Fort Saint Simons. He marched to a position where he could ambush the Spanish as they crossed a causeway across a marsh. Once there, he decided he needed more troops and personally rode back to Fort Frederica to get them.

While he was gone, the Spanish column crossed the causeway and the British-Indian force took them under rifle fire. The Spanish took cover on the side of the causeway and returned fire. For about an hour, the two forces simply volleyed at one another through dense rifle smoke. Some British soldiers even ran away, but the senior officer at the scene, a first lieutenant, controlled the incipient panic.

Finally, the Spanish commander decided to withdraw, which was just as well since many of his troops had already done so in a freelance manner. After two more weeks of each side jockeying for position and advantage, but no fighting, a British fleet arrived and the Spanish abandoned the island. As it turned out, Spain never pressed a claim for Georgia again.

On the British side the two battles were greatly exaggerated, while on the Spanish they were greatly minimized. The Spanish commander, Manuel Mantiano, claimed that he lost only seven killed at the marsh, while the British said they killed at least 200 and the marsh's waters ran red with Spanish blood (hence the name of the battle).

The next year, Oglethorpe (now a national hero) left for Britain, where he married an heiress. He stayed in Britain the rest of his life and never returned to Georgia. There was only a little more fighting in the Americas until the war ended with the Treaty of Aix-la-Chapelle in 1748. The treaty ceded Georgia to Britain; in 1763 Spain gave Florida to Britain as well in a territory exchange under the Treaty of Paris.

With the end of Spain's threat to Georgia, Fort Frederica had no purpose. Britain pulled the 42nd Regiment of Foot from the fort in 1749, though a tiny garrison remained there until at least 1774. The town adjacent faltered without the garrison and by 1755 was mostly empty. Most of the town burned in 1758 and all but a tiny number of the few residents left.

Email ThisBlogThis!Share to TwitterShare to FacebookShare to Pinterest
Labels: History

Council of Bishops and the One Church Model

The topic for the special Conference is to set a way forward for the church in grappling with the issue of homosexuality. Presently, there are two restrictions on this issue:

That's it. And those are the two issues that the GC will address. At the last ordinary GC in 2016, a Commission on A Way Forward was founded to study and draft proposals to go before 2019's called GC. The proposals, usually referred to a models, were to be presented first to the Council of Bishops, who were empowered in 2016 to choose one to recommend to the 2019 GC. (Or the Council could reject them all and make its own recommendation, but no one expected that to happen, and it has not.)

The Commission came up with three models, each of which were presented to the Council earlier this year. They are:
Last month, the Council of Bishops voted to recommend the One Church model to the 2019 Conference. However, it also voted that the other two models should remain on the table for consideration. By the way, bishops have voice but no vote at General Conferences.

For more information, read this piece from the UM News Service and see this video.
Posted by Donald Sensing Links to this post