A brief dive into the doctrine of Original Sin 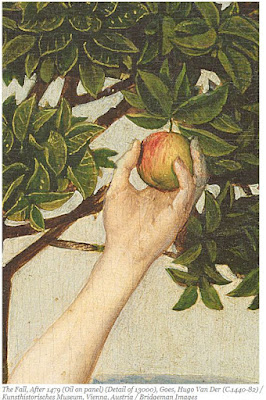 “Nothing is more difficult to understand," Augustine once wrote, "than the nature of ‘the ancient sin." A discussion of original sin is confused since there seems to be no consensus on specifically how to define “original sin.” After all, the New Testament, early church writers, the Greek fathers and Augustine all concurred that Adam’s sin somehow established sinfulness in present humankind.

“Somehow” is the sticking point. If “In Adam’s fall we sinned all” is true, the question is, “How?” The subject of agency – exactly how Adam’s sin is transmitted to subsequent generations - is therefore central to what “original sin” means. The agency question was not considered in the New Testament. It was barely implicit in the early church. Eastern and western thinkers, Pelagius and Augustine looked at the question, Augustine very closely. (No one after Augustine could ignore his development of agency.) Pelagius examined original sin to reject it. Thus, original sin is a doctrinal development of several writers in the east and west, brought to full flower by Augustine.

New Testament: Paul wrote that “sin entered the world” through Adam and that because all persons sin, all persons come to death (Rom 5:12). To Paul, human sinfulness is the direct result of Adam’s original rebellion. Yet Paul developed no theory of participation in or transmission of Adam’s sin. That “all have sinned and fall short of the glory of God” (Rom 3:23), was to Paul so self-evident as barely to need further exposition. For NT writers, sin was violating the Law: “For whoever keeps the whole law and yet stumbles at just one point is guilty of breaking all of it” (James 2:10). The main thing was grace and redemption rather than sin’s origins. (In fact, God’s grace lies at the heart of the later debate about sin.) On the agency by which Adam’s sin is present in living persons, the NT writers were silent.

The Early Church:  Early church apologists were compelled to formulate fuller answers than the evangelical apostles to the Christological question, “Who is Christ?” and the soteriological question, “How does Christ save?” From what does Christ save Gentiles, who were never yoked with the Law? How does he do it? Their answer was that Adam’s sin was archetypal. Justin held that “we have been trained up in wicked ways by our environment.” Because the world was evil when we were born, we could not prevent being tainted thereby. Both Tatian and Theophilus saw Adam’s act as “a type of disobedience of the race.” To Irenaeus, Adam’s disobedience resulted in the loss of humanity’s likeness of God and enslavement to Satan, from which Christ reclaimed persons when they accepted him as Lord. Human participation in Adam’s deed is both inevitable and therefore so is participation in his guilt. However, these writers mostly ducked the question of agency. Irenaeus simply presupposed “some kind of mystical . . . identity” between Adam and all his descendants. Pseudo-Ambrose later wrote that “an inheritance of guilt has been transmitted” from Adam to all, but while this implied agency, it did not describe it.

The axiom until this point was that men and women were simply inherently sinful, slaves to sin (re. Rom. 7:25). Even though they desire the good, they do otherwise (Rom. 7:15). Jesus, being both God and human (the Christological question) saves by his superior power over Satan (the soteriological question). The focus remained a doctrine of Christ rather than a doctrine of humankind.

The Greek Fathers:  Gregory of Nyssa and other eastern thinkers presented an outline of a real theory of original sin, specifically linking natural propagation with the agency of transmission. Basil  used the term, “transmission” of Adam’s sin, as did Ps.-Didymus, who wrote that people are held under sin “by transmission,” with the parents’ sexual union being the agency. Persons are inherently sinful from birth, although this original sin is “involuntary” and therefore purification is called for more than condemnation.

Pelagian Radical Free Will:  To Pelagius, the assumption that human beings cannot prevent thier sinning was insulting to God. He held that people were not “puppets wholly determined by the movements of divine grace.” Human will, he thought, was not inevitably prejudiced toward the bad because of the Fall. There is no “congenital defect in man as he is born,” and people can observe God’s commandments without sinning. Thus, grace is not absolutely required for salvation since grace overcomes sin and it is at least theoretically possible not to sin. Pelagianism was anathematized in 431, but its propagation helped bring about Augustine’s long-term delineation of a doctrine of man, often called the “full-blown Latin” theory.

Augustine:  Before Augustine, Ambrose envisaged “the inherited corruption as a congenital propensity to sin,” conveyed by sexual union, but which “need cause us no anxiety at the day of judgment,” which is concerned only with personal sins. To Augustine, though, Adam’s sin was so grievous that it “resulted in the ruin of the entire race, which became . . . sinful itself, propagating sinners.” Augustine was satisfied that the Church’s traditions, i.e., baptizing infants, supported the reality of original sin. The agency was the “carnal excitement” which accompanied the physical act of generation. Yet, “the essence of original sin consists in our participation in, and co-responsibility for, Adam’s perverse choice,” as J.N.D. Kelly explains it. To Augustine, present persons are completely complicit with Adam. But Augustine used Greek Platonic philosophy, not the theology of revelation of the Bible, to formulate his theory. In a real sense, Augustine’s doctrine of Original Sin is not “biblical,” it is a very imaginative extrapolation of a brief biblical teaching. There is no biblical reason to adhere to Augustine’s theory to the rejection of all others.

In Platonic terms, Adam was the Idea of humankind. His fallen state, occurring as it did before he had children, is the Idea in which all subsequent persons participate. Guilty Adam represents all humanity; thus all humans are guilty, all merit punishment, all require grace to be saved. Augustine, unlike the Greek fathers, saw no incongruity in seeing humanity’s (even infants’) participation in Adam’s sin as voluntary.

Process theology: Process theology is a very new development in Christian history, being a discipline less than a hundred years old. It rejects reliance on ancient Greek philosophy, mainly Plato and Aristotle, as templates to use interpreting the Bible, and also rejects the theologies of John Calvin and Martin Luther, both of whom affirmed that free will is a delusion and that all events, including human (apparent) choices, are already known to God and since God cannot know anything false, what God knows must be real, therefore predetermined.

To the contrary, process theology posits that the fundamental reality in the universe is discrete events, and that God's will is always present in shaping events, but not pre-determining them. God produced the universe, but did not reproduce himself in so doing. God created humanity but did not procreate humanity -- both of which is to say that while human beings reflect the nature of God, we do not encompass it altogether.

The account of Adam and Eve is not seen a literally-true human history, but an inquiry into why is the human condition the way that it is, especially in relation to God. (This view of the biblical story from creation to the end of the Noah story is not original with process theologians but has been mainline Christian interpretation for almost 200 years).

Psalm 51.5 is a good summary: "Surely I was sinful at birth, sinful from the time my mother conceived me." Each one of us is conceived by and born to sinful parents and we literally inherit this sinfulness from them. Sin is a genetic condition because human beings are created beings who are mentally, physically, and spiritually incapable in our very being of avoiding sinful thoughts and deeds. It is impossible not to sin because of the nature of our creation and this concept is called "original sin."

Conclusion:  Orthodoxy affirms that Jesus really lived, really died and was resurrected to save people from their sins. What does this mean and why and how are people sinful? Ultimately, some sort of “original sin” is necessary to cohere Christian doctrine. At the end of the day, no one theory of original sin answers every question or satisfies every quandary. Love, grace, justice and mercy—all are God’s qualities and all apparently conflict in some way in the considerations of sin and redemption. Ultimately, the choice seems clear: Adam’s sin either decisively affects all humans or it does not. Pelagius and Augustine represent the poles of the argument but their one-sidedness prevents a lengthy stay there. Middle positions (e.g., Ambrose’s) try to have it both ways, which has its own problems. “Original sin” conceptually certainly predates Augustine and was present in several early traditions of doctrine.

Recent paths of Christian theology take a different view, seeing the old-Orthodox view as too heavily reliant on (a) a somewhat literal-historic view of Genesis and (b) Platonic or Aristotelian philosophy. Instead, it sees human sinfulness as simply inherent in the human being to begin with because we are not God.

Related: Christian theologian Steven Shippee compares the orthodox Christian view of original sin with the Buddhist teachings of the nature of the human being and concludes it's a lot closer than Buddhists generally think. I take no stand on Buddhism's doctrines but Shippee's explication of original sin makes some good points, even though I think he is off target in a couple of important ways. But still a good read.
Posted by Donald Sensing Links to this post

Today I recognize and give thanks for the service of four special veterans in my life. My father, Thurman Sensing, now 90, was a Seabee sailor in and after World War 2 aboard the battleship USS Texas and the escort carrier USS Bougainville, both in the Pacific. 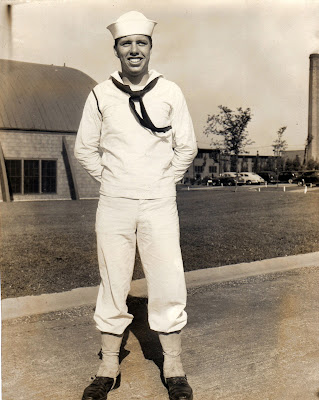 Today, Cathy and  I will take Dad to lunch, an annual tradition for us. 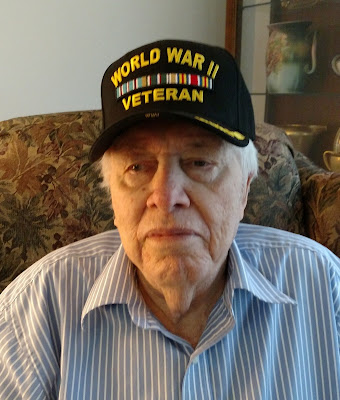 Below is my father-in-law, Col. (ret.) George D. Stephens, now 98, who entered the US Army as a private six months before Pearl Harbor. He fought throughout the Pacific campaigns and served during the Korean War as well. 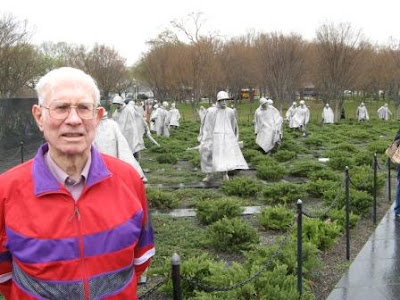 This is our eldest, Lance Cpl. S. M. Sensing, USMC, who deployed to Iraq on the date shown in the photo, shown at Camp Lejeune, NC, with Cathy. 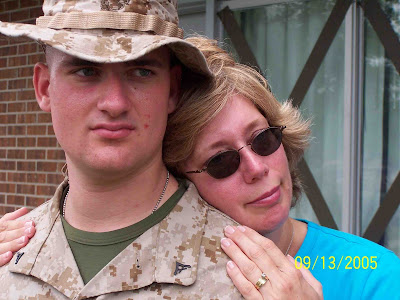 Dr. (Capt.) Thomas Sensing is in surgical residency at Wright-Patterson AFB, Ohio, in the US Air Force Medical Corps. As a retired officer, I administered his oath of commissioning upon his graduation from medical school in 2016, one of the most memorable and fulfilling things in my life. 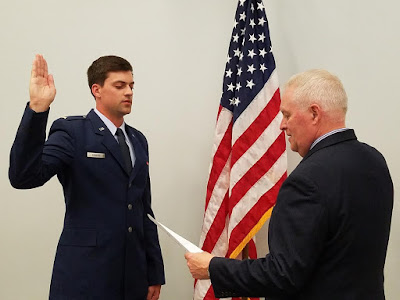 This is Thomas with his wonderful wife, Dr. Wendy Sensing. 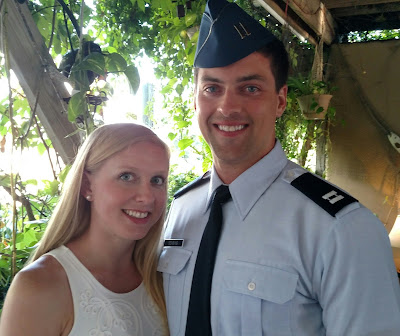 God bless them and all our veterans and their families.