A Checklist for Your Consideration

For now, I offer a checklist of questions. As you answer these questions, I hope you will be motivated to think how your church might look at its expenditures and budgets in a different light.

An Attitude of Abundance

If we really trust that God will provide for our churches in all areas, including finances, we may realize that we do not have a money problem; we may have a stewardship problem. These fourteen questions can be a starting point to help you move toward a realistic and faith-based approach to church finances.

From Atheist Professor to Catholic: An Interview with Dr. Holly Ordway


There were many pieces of evidence that all fit together to make a convincing case for the Resurrection [of Jesus]; I’ll mention just a couple here. One of them is the behavior of the disciples before and after the Resurrection. The Gospel accounts do not portray their behavior after the Crucifixion in a particularly flattering light. Even though Jesus had predicted his own resurrection, the disciples gave up and went away, assuming that Jesus was a failed messiah. If the disciples had made up the Resurrection story afterwards, why would they have included details that made them look disloyal and cowardly? My academic studies in literature allowed me to recognize that the Gospels were written as history, not myth or parable, and that there hadn’t been enough time for a legend to form. It began to seem like the best explanation for all these events being recounted this way, was that they really happened.

Then, after the Resurrection, there’s a complete turn-around in their behavior, and they become bold proclaimers of the Risen Lord. There were plenty of words that people in ancient times could have used to describe visions or sightings of ghosts, and indeed, such language would have gotten them in much less trouble! But they spoke of a Jesus who was alive, bodily resurrected, and in short order were willing to die for that claim.

Perhaps the most convincing evidence for the Resurrection, though, was the Church itself. If I supposed that the Church had invented the Resurrection to explain its own worship of Jesus, I had to ask, how did that worship arise in the first place? If the Church was not the result of a miracle, it was itself a miracle.

The last point is actually much stronger than people give credit. Skeptics and some self-described atheists (including some I have talked with) dismiss the historical fact of Jesus, claiming Jesus was invented by the Church or was, perhaps, a real man but one who was nothing like the Jesus described in the Gospels and the rest of the New Testament.

The problem is, as Prof. Ordway points out, that none of those alternative theories of Jesus explain the rapid rise of the apostolic missions and the sudden appearance, at a definite time of history and place, of the Church, which has from its inception declared it was founded solely on the life death and resurrection of one Jesus of Nazareth.

So if not those things, which an atheist must deny, then on what was the Church really founded? The Church undeniably began in the middle third of the first century C.E. It did not exist before then. How then to account for its founding apart from Jesus and the apostolic proclamation?

Now to treat the founding of the Marine Corps as do skeptics treat Christianity, a skeptic would say something like this: "The USMC was not founded on Nov. 10, 1775, in Tun Tavern, but much later, perhaps as late as 1840. It probably was still in Philadelphia, though."

But on what basis could he make such a claim? Like the founding of the Church, there is no alternative story of the founding of the USMC that can be imagined to account for all the facts of the Corps' history. There is exactly zero evidence to support the contention that the USMC was founded other than what the histories say, and there is no evidence, either, to support the idea that the Church was founded either (A) at a time or place other than when claimed, or (B) for any reason other than what is claimed, namely, the resurrection of Jesus.

Or another way, if a skeptic were to claim that Washington never actually crossed the Delaware that night to attack the Hessians at Trenton, NJ, then he would have to also provide an historically-grounded  explanation of why and how the Hessians were defeated, killed, captured and plundered that day. Absent such, we will have to continue to adhere that Washington did indeed cross the Delaware as claimed.

My experience with such skeptics (who often call themselves "rationalists") is that as soon as you challenge them to produce actual historical evidence that the Church was not founded on the resurrection and its immediately-following apostolic proclamation, but on something else, and would they explain what that something else was and what is its documented, historical grounding, they change the subject and start talking about who will win the Super Bowl come February.


It’s important to say that there was no single, knock-out piece of evidence that convinced me; I was convinced by the cumulative claim, the way it all fit together. Historical events can’t be proved like a math problem or tested like a scientific hypothesis, and there’s always a way to form an alternate explanation. But just because an alternative exists doesn’t mean it’s is equally reasonable or likely. Speaking within my own field of literature, there are people who claim that William Shakespeare didn’t really write his plays. There are even a few legitimately fuzzy areas: for instance, a few of his plays were co-authored, and it seems likely to me that at least one passage in Macbeth (Hecate’s speech) was a later interpolation. Nonetheless, the evidence taken as whole points to Shakespearean authorship!

This is another key point. Frequently (well, almost always), the skeptics or atheists I have talked with have invariably claimed that science rejects the resurrection and indeed, God himself. But they do not seem to grasp that the founding of the Church was an historical event, not a scientific experiment, and the resurrection of Jesus was a historical event, too, not a scientific experiment. Science can't validate or invalidate historical events: you can neither prove nor disprove, scientifically, that Gen. George Washington led his army across the Delaware River on Christmas night, 1776, to attack Hessian forces at Trenton, NJ.

Human reason and intellect is much more than mere scientific knowledge. The question is not, I think, is there ironclad, "scientific" proof of God or the Resurrection, but is this: based on the weight of evidence, is Christian belief reasonable? For 2,000 years, reasonable has garnered the votes. 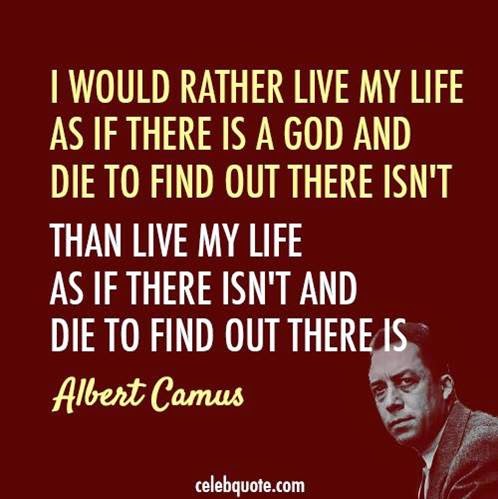 And that is most reasonable, too, as Blaise Pascal explained.

Update: "Why the Ancient Christian Record About Jesus Is the Most Reliable"

How we are committing cultural suicide 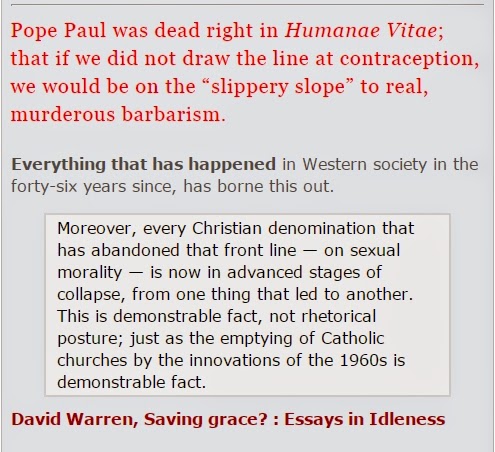 From American Digest. The entire essay is here.

What is the conext? Among other things, this:


Today, though, sexual intercourse is delinked from procreation. Since the invention of the Pill some 40 years ago, human beings have for the first time been able to control reproduction with a very high degree of assurance. That led to what our grandparents would have called rampant promiscuity. The causal relationships between sex, pregnancy and marriage were severed in a fundamental way. The impulse toward premarital chastity for women was always the fear of bearing a child alone. The Pill removed this fear. Along with it went the need of men to commit themselves exclusively to one woman in order to enjoy sexual relations at all. Over the past four decades, women have trained men that marriage is no longer necessary for sex. But women have also sadly discovered that they can't reliably gain men's sexual and emotional commitment to them by giving them sex before marriage.

That's how we committed (and continue to commit) cultural suicide, but it doesn't say why. As for that question, here is one clue:


In particular, sexual sin seems to be the largest single factor driving disbelief in our culture. Brant Hanson calls sex “The Big But” because he so often hears this from unbelievers: “’I like Jesus, BUT…’ and the ‘but’ is usually followed, one way or the other, with an objection about the Bible and… sex. People think something’s deeply messed-up with a belief system that says two consenting, unmarried adults should refrain from sex.” In other words, people simply do not want to follow the Christian teaching that sexual intercourse should take place only between and man and woman who are married, so they throw the whole religion out.

But I maintain that after 50 years of this "liberation," it is empirically provable that this is the way that leads to death.

Left Behind gets left behind

Thankfully, American movie goers seem to have enough sense not to waste their time or money with religious escapism nonsense. Left Behind, the new thriller based on the best-selling books of the same name, and starring Nic Cage, basically bombed at the box office by pulling in less than $7 million its opening weekend, ranking it the sixth in box office gross.

Here's a short video to get up to speed on how it came to be: Where Did Rapture Theology Come From? by leading Bible scholar Ben Witherington.

And the long course, 32 minutes, by William Lane Craig: